Not many of you follow my “Par or Better” tweak of the game scoring. Or the more widely accepted “Tee it Forward” program, with us playing on the still too long “Gold “tees. It’s true check the tee tables. But it is true that a sizable portion of the “old” Geezers have moved up to the forward tee box. But that is only the first step towards “Par or Better” rounds of golf. 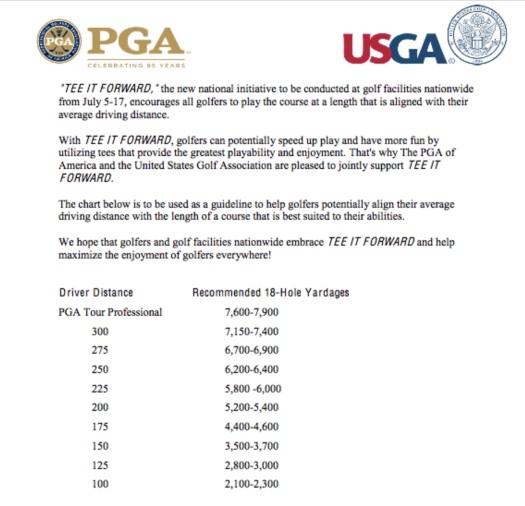 I average…only in the 175-180 range….sigh! It’s true…measure it sometime. I may have a few 200 yard drives, but those are downhill or downwind, and they are offset by the 150-160 yard ones. So technically I should be playing only 4,600-4,700 yard courses. at Boundary the Gold Tees are 5,700 yards. With the long portion being on the back nine. So that is anywhere from 1,000-1,100 yards further than the PGA/USGA recommends……dividing that by the 14 driver holes,  you get almost 80 yards per hole difference….which from my earlier analysis is the basis for the “extra” wedge shot.

So rather than using the wedge approach…..

I came up with a plan to provide egalitarian golf with the longer ball hitters that improves on the regular tee it forward deficiency when you play from a forward tee that is still too long. This addresses the approach shot differential….I observed that boomer Bob was hitting an 8-iron as his approach while I was still hitting my 3-wood…it’s true the guy who hits is drive 30-40-50% further than you actually is going to do the same thing with those 2nd and 3rd shots also. It is also true that it is preferable to hit a short iron or wedge rather than a fairway wood or long iron/hybrid.

So to provide equity I propose: At the golfers discretion the “Shorter Shot Golfer”, SSG be allowed a free drop of his or her ball no closer than than the average distance from the pin that the SSG will normally hit the same club that the “Longer Shot Golfer”, LSG used for their approach. Seems only fair that if Bob is hitting his 8-iron when we are both at the 150 yard marker then I should get to walk up and drop and hit an 8-iron from 108 yards which is where I normally would hit it. This rule can be applied only to the approach shot, presumably trying to get to the green in regulation. So either the 2nd shot of par 4’s or the 3rd shot on par 5’s.

BTW…this does not imply that the SSG can actually accurately hit that shot, but at least gets to try.

I will officially submit as a Geezer Rule Change, to COB, rules and tournament director  and to Chipper Chuck requesting voice vote on the change at the next meeting…during the July BBQ.

Remember you all have a STEAK in this, anyone voting against the rule change will be subject to the Burning 🥵 of the STAKE, consequence, for Heresy……No Blackmail intended, but we may have some charred Beef.

..Sent from my iPad